Acne and cutting of skin due to some negligence is very common and both of these unfortunate events usually end up in scars. Scars on visible parts of the body like face, neck, and forearms can cause extreme frustration that can lead to stress. Since this issue is very common so are its solutions. There are several treatment procedures, creams, and lotions that can help you to get rid of scars. Laser scar removal is one of the fastest ways to get rid of scars. A picture showing laser acne scar removal before and after.

How does Laser scar removal work?

The laser is a concentrated beam of special light. The nature and properties of the laser vary with the nature of its source. In the laser treatment of scars, a beam of laser used to smoothen the upper layer of skin, the epidermis. Some of the standard lasers used by the majority of physicians are 1064 nm Nd: YAG, 1540 nm Er: Glass, 1320 nm Nd: YAG, and 585 nm pulsed dye laser. These lasers are considered as harmless but they are not entirely harmless because frequent exposure of skin on laser can lead to some complexities like uncontrolled cells formation and demising of tissues.

Watch laser scar removal before and after.

Appearance Will not Disappear

The effectiveness of laser therapy depends on several factors like the nature of skin, extent of scars, selected laser, and the expertise of the doctor. If the scar is deep then its appearance will not disappear entirely. This fact may disappoint some people but new technology and equipment is improving the results remarkable. Small and average scars are easy to remove but scars due to extreme acne or deep cut are hard to remove. You will need to use some creams to get the best out of laser treatment. The appearance of the scar will not disappear but it does not mean that people will be able to see your scar easily from the naked eye. After the treatment, I will be easy for you to spot your scar but other people will not be able to locate it easily. 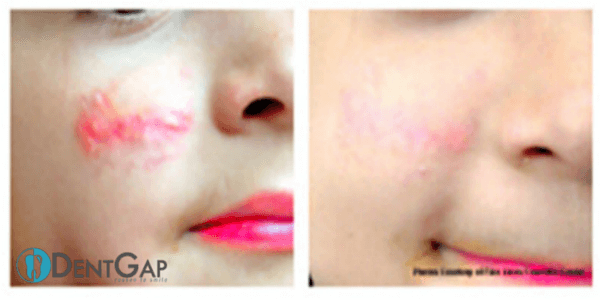 How much time will it take?

There is no doubt that laser therapy is the fastest way to remove scars but still it takes time.

Treatment of small scars can take up to two to three months because one session of laser therapy is not enough to make the epidermis smooth.

Patient has to go through several sessions of laser therapy, depending on the nature and place of the scar, to get the desired results.

Moreover, doctors avoid frequent exposure of laser on patients’ skin and try to give maximum gaps between two sessions to prevent patients from the side effects of laser.

So, if you are going for laser treatment even then you have to remain patient but still, it is better to wait only for few months rather than waiting for a year or so.

The cost depends on the length of scar and complexity of the scar, mostly little scars  (1-inche or lesser) cost $250-$350.

If scars are larger in size, it may cost more (approximately $850-$1000).  The treatment of keloid scars is quite expensive because they are a bit complex to treat, and it costs $1800 per treatment.

Why it’s expensive? Because the cost of treatment totally depends on the cost of lasers which doctors choose to treat you.

There are many lasers which are used for treatments, lasers cost from Dollar 1500,000 to Dollar 200,000, and it’s necessary to have good skills to use them effectively.

Yeah! it does hurt a bit when its used for more than 2 minutes but it’s all over in 2 minutes. however, the fact is, it works well and faster as compared to other treatments. If you are going to take treatment, you should not worry about it.

Though scar removal laser is very effective way to regain smooth and attractive skin but you must consult with the successful and highly reputed physicians before going through any kind of scar removal treatment.